Every prelude and fugue has a different type of difficulty (almost making each one its own etude), but certain moments just stick out for their tedium. Even though I’m not very far into Book 2 (page 20 of ~140), measures 24-25 of the C# minor fugue are trouble! 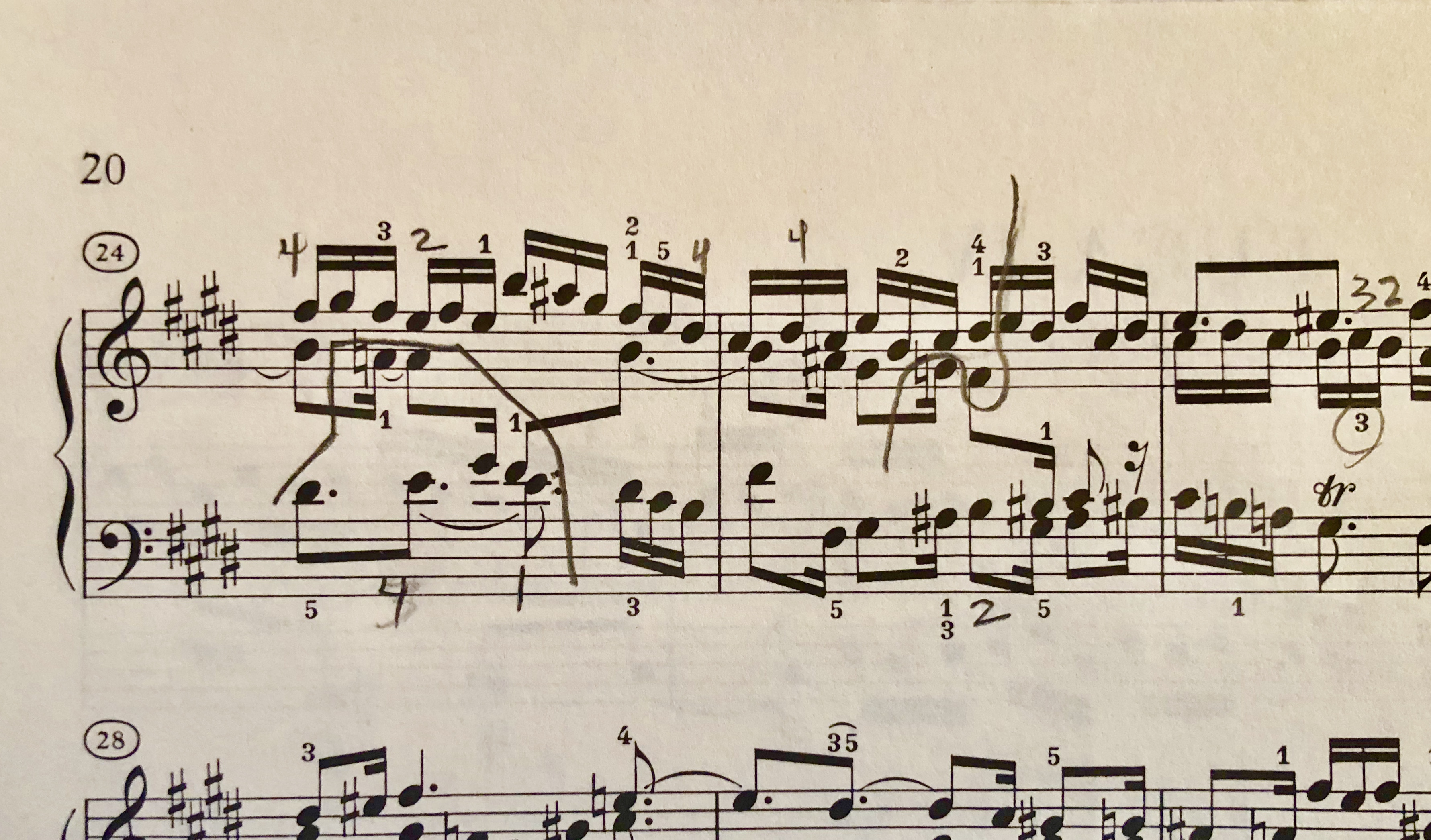 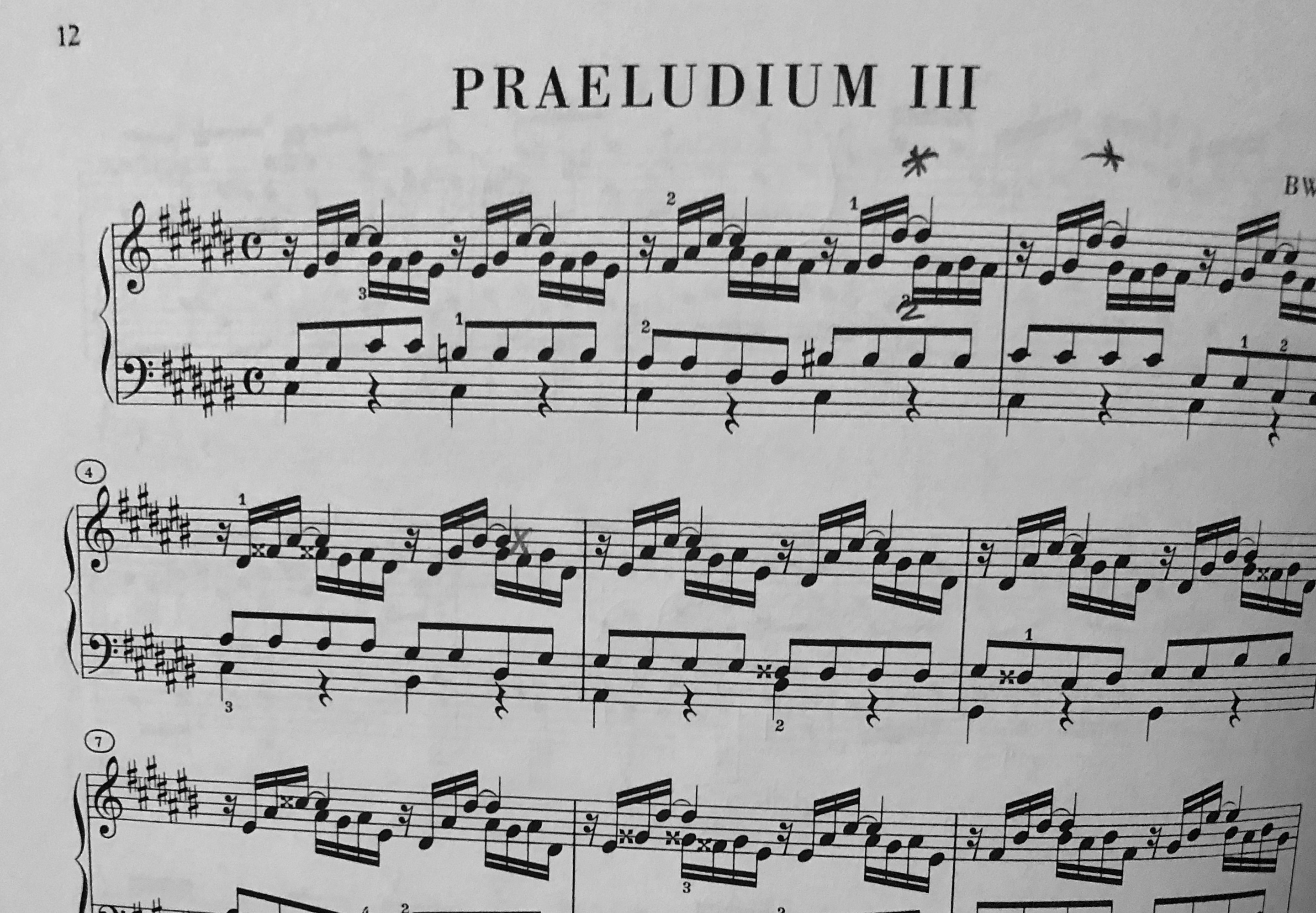 Overall, I found this prelude and fugue to be more difficult than Nos. 1 and 2. With more time, I would find ways to better color the opening half of the prelude (which I consider a Romantic version of the C Major Prelude in Book 1). I feel there are better ways to think of phrasing that either play down or enhance the tenor-voice notes; the ties in the right hand also have the potential to be a bit more interesting, perhaps with embracing them as suspensions.

The fugue is generally difficult, for reasons I’ve outlined here.

In my very first post about recordings of the Well-Tempered Clavier, I stated reasons for my avoidance of one particular specialist of the work. I find myself now writing about that very specialist, Glenn Gould.

Like my process of learning the C Major Prelude, I surveyed the same three albums (Schiff, Tureck, and Papastefanou) for my study of Fugue No. 3 in Book 2. There are a couple of very specific elements of these pianists’ recordings that I love: Papastefanou’s cadenza-like close to the rhythmic build-up of the fugue, Tureck’s consistently nimble articulation throughout. In contrast, Gould’s rendition was off-putting: excessively slow, pedantic, still in its practice-stage. As heard in the video below, his articulations are inconsistent, differing from one phrase to the next.

Before I explain my change of heart, I should mention that I find this fugue among the most difficult for several reasons. First, the rests in the theme make it difficult to distinguish the intent of certain pitches––sometimes they seem meant to provide harmonic structure, other times they’re meant more literally as melody. Second, the overlapping of voices after the first three pitches, and the inverted countervoice in measure two, make it difficult to “stretch” your listening to hear the theme as inclusive of the somewhat-buried sixteenth notes. Third, the rhythmic build-up (eighths turn to sixteenths, which turn to thirtyseconds in the final page) implicates the tempo; start the movement too quickly and you’ll inevitably end up with a fast-rolling snowball. A slower tempo also plays into the difficulty of especially “stretched” listening.

It’s the embrace of the third difficulty that makes Gould’s recording striking. His final lines, in the compounding of the thirtysecond-note motive and in a slower stacking-up of thematic entrances (such as those beginning around 2:15 in the above video), give the entire build-up a sense of payoff that I don’t personally feel when the tempo is too quick. Papastefanou’s recording finds a way around this problem by creating cathartic, cadenza-like flourishes out of the running thirtyseconds in the penultimate line. Schiff accentuates the gravitas of the thematic entrance in the bass voice during the same line, which is also a work-around. Gould, in contrast, makes the working-out of thematic and motivic material the musical highlight, so much so that the running lines (ornament-like, the fastest rhythmic material of the piece) actually seem to act as a denouement to the movement.

Tempo-wise, craftsman Gould began with the end in mind; artist Gould allowed the compounding development of motives to be the apex of the movement’s essence (arguably the musical intention of every fugue). It’s in the careful synthesis of the two that makes his interpretation most compelling.

Overall, the C Minor Prelude & Fugue in Book 2 is quite straightforward; I found experimenting with various articulations, touches, and dynamics to be a rather easy and fun process. For example, in starting the piece, I tried out a few different versions simply by changing the articulation type in each hand. Here, you can hear staccato articulation in each hand (1), followed by full legato in each hand (2), followed by a lighter legato in the sixteenth notes with two-note slurs in the eighth notes (3). Use the small arrow on the right side of the video image below to cycle through each version. Press the center of the video to play/pause the recording before cycling to the next.

I chose option 3 because I think it best showcases the ability to play different articulations in each hand. During moments of similar intervallic content, I continue with this articulation throughout the piece; in other instances of eighth notes (usually instances of more stepwise motion), I use a more detached/staccato touch.

It’s also interesting to note that after measures 1 and 2, the Busoni Edition begins marking beats 2 and 4 with accents, with the off-beats as staccatos. Although I didn’t consult this edition until after I’d learned the movement, I think he’s on to something, as a fast tempo can give those beats a sense of propulsion into the larger beats of 1 and 3:

The C Minor Fugue is one of my favorites, as I’ve always felt Bach’s slow, minor movements are the most beneficial for building polyphonic ears. In the post about my process for learning fugues, I pointed out the importance of building muscle memory through the mindful stretching of the fingers to reach certain intervals (i.e. it’s not just learning that finger 5 goes to finger 2, for example. It’s about  feeling that stretch, both physically and mentally). This is a great fugue for that kind of deliberate practice––it’s shorter, the theme doesn’t involve any extended stretches of “fast notes” (such as the C Major Fugue), and (theory-wise) the movement offers some interesting ways of stacking motives.

My biggest difficulty was in the latter of these three features. More specifically: moments of rhythmic augmentation––that is, stretching the theme into larger rhythmic values. Instead the theme’s standard eighth-note introduction, we can see it written in quarter notes in the left hand at the bottom of the first page. When the theme (which I also label the melody, at times) becomes wider in rhythmic value, it becomes difficult to hear it in the same way as I heard it when it was in eighth notes. Basically, my mind doesn’t seem to want to stretch that far, to hear it across two measures rather than one. Here is the first instance:

While a first-time listener might be able to hear the left hand as the theme, my goal is to first hear these theoretical features of the music, myself, as they’re happening. Second, I must find a way to broadcast those clever moments to the audience through technique. In general, it’s difficult to bring out a theme that is written in a middle voice (in this case, the tenor voice). However, I’ve found the true difficulty lies in the stubbornness and impatience of the ear.

In a future blog post, I’ll discuss those instances when a hand has to dip into the other clef (either to play three voices at once, or just general hand substitution). In the image above, those moments––commonplace in Bach––are shown with a long, curved or swooping line.

Just the opening bars of the C Major Prelude (Book 2) offer ample interpretive decisions for pianists, evidenced by the small sample of recordings I’ve put together. In choosing three records, I wanted musicians who may be emblematic of the performance practice at the time of recording.

Here are the recordings at hand, all of which are of the complete WTC Book 2:

I should note that I intentionally left out the one pianist who is most known for Bach: Glenn Gould. I personally love his recordings and always am interested in his approach to a work––his disregard of previous examples of “how the music should go,” his artistic autonomy, his intensity…I could go on. However, I’m leaving him out of my sample of recordings because I think there has been enough analysis of his style, almost to the point of mythologizing. Although I’m stunned by what Gould did throughout his life, I simply am not seeking to be yet another voice talking about the nuances of his Bach interpretations.

With that said, I’m most drawn to Rosalyn Tureck’s rendition of the first prelude (in addition to her entire recording of the Well-Tempered Clavier). She plays with a depth of sound, rather than a loudness, and never seems overtaken by the desire to be virtuosic for its own sake. In faster works (the C Major fugue, for example), her tempi are attractive to me: unapologetically not too fast, emulatable. Essentially, her record is great one for score study. If you listen closely, you’ll hear how the first few notes accelerate into an a tempo; throughout the entire first line, there is a subtle ebb and flow to the right hand line (notably, a slight ritardando into the entrance of the alto voice at measure 3).

András Schiff, the pianists’ pianist, plays with marked clarity in tone and articulation. (Of all the pianists I’ve heard live, he has such a consistent, almost objective style in the music of the Baroque and Classical eras.) In his 1986 recording, his decisions of articulation seem entirely natural (though so difficult to emulate), tightly controlled yet spontaneous and fresh. Consistent with the time signature, Schiff makes it easy to feel a quarter-note beat by emphasizing the G on beat two of the first measure. This contrasts a bit with Turek’s rendition, which I can feel as either a quarter- or eighth-note beat throughout the opening line. Even though Schiff replays several notes that are indicated as ties throughout the movement, his generally brassy, soprano-dominate, confident sound makes me love these inconsistencies with the score.

Alexandra Papastefanou sets up a tempo that is a bit faster than Tureck and Schiff but chooses not to maintain the tempo throughout the second page of the prelude. The recording space is also a wetter environment, which creates a bit more bleeding-over of sound (or, perhaps she’s just using a tad more pedal). The most striking element of her Baroque playing are moments of space between the hands; she’s not always playing the hands together, rather landing on a bass tone a millisecond before the other notes that are present. In the past, that characteristic was common in the performance practice of 19th-century music, perhaps in its effect of heightening the level of romanticism to the work. For the most part, we’ve since done away with that practice, perhaps in an effort to play the music more “correctly,” to be more literal about what’s on the page. New Criticism, the mid-twentieth century system of literary analysis that sought to analyze work only as it appeared on the page (rather than through historical context or the writer’s biographical information), seemed to have an effect on the classical music world during the rise of competition pianism. Alexandra Papastefanou’s playing seems to reference an older tradition that I find interesting in today’s landscape. In the opening of the prelude, she seems to give emphasis on those thumb-notes––those leaps downward in the soprano melody––because it helps establish the measure’s harmony. The down side of this is that it creates a phantom alto voice, which isn’t present in the score. In my opinion, Papastefanou plays into agogic tones too often, though it is effective in creating a more romantic interpretation.

Just based on the first few measures of music, I’m inclined to continue studying Tureck’s and Schiff’s recordings. In the case of the latter, I find his playing unparalleled; it will serve as a reminder of possibilities within the Baroque style––possibilities I don’t necessarily plan to emulate (because that’s likely unattainable), but that showcase Bach’s musical transcendence.

My second office. We've had a lot of rain and flooding where I am, which makes it a perfect time to stay in & #practice. #piano #keyboard #bach #jsbach #dailybach #dailybachproject #home #homeoffice #office #100daysofpractice #gould #music #baroque #baroquemusic #challenge #work #steinway #pramberger #painting